Along the southern coast of Uruguay, where rolling fields meet the muddy brown waters of the Rio de la Plata, the town of Colonia del Sacramento mixes a rich history with tourist charm. The town is located three hours west of the capital Montevideo by bus, and more famously, roughly 90 minutes by ferry across from Buenos Aires, Argentina. While often overshadowed by those two neighbors, Colonia has enough of its own story to warrant a visit.

The heart of Colonia’s charm is a direct result of a huge disappointment. Namely, the city was not chosen to be the main port of the Rio de la Plata region. In the days of the Spanish colonial regime, silver- the namesake of both the river and the entire country of Argentina, was brought from the mines of Potosi, in present-day Bolivia, down the Parana river to the mouth of the Rio de la Plata. The city that controlled the shipment of that glittery metal would get a piece of the action, and grow based on the silver trade.

As even a basic look at a map of the region will show, poor Colonia wasn’t picked. The port on the opposite side of the river, Buenos Aires, became the trading post and is now, one of the biggest urban centers in South America. From the river banks in Colonia, you can look across the river at sunset and see the skyscrapers of its rival in the far distance- and feel the melancholy of a city history passed by.

History forgetting little Colonia, though, has a happy ending. The city was left preserved from its colonial days under a range of rulers, Spanish, Portugues, Brazilian, and finally as part of an independent Uruguay. Each left a mark that is still visible today, protected and preserved by the city’s bad luck.

For most people, the city has become a quaint little day trip from one of its larger neighbors. There isn’t much to do, per se, but the city itself is the attraction. You can pass the hours wandering cobblestone streets and ducking into a hip mixture of new restaurants and bars, as well as shops and cafes in preserved buildings.

The town is small and can be easily navigated on foot, and there’s ample eating and drinking to suit all tastes. Wander its streets, find some place that looks cool, and give it a try. The city’s walls are more or less intact, walk along with them, cross the moat, feel history under your feet. The local museums, though small, are all worth checking out to learn more about this gem of a town.

For those who are looking for a better perspective on the city, you can climb the old city lighthouse to look at the old city from above, and those looking to get an even higher perspective can check out one of the cafes which take advantage of Uruguay’s legal drugs.

One-stop I personally recommend is a small bar of sorts called La Pergola. It’s found on a patch of grass along the riverside and sells cheap beer and eats, though with only the most basic of a setup. As of the last time I visited they didn’t even have a bathroom, though a public one is nearby. Sit there at sunset if you can, and watch the glowing sun dip into the water of the Rio. See if you can make out the silhouette of Buenos Aires in the far distance, and feel the sleepy nostalgia that makes this place more than just a preserved town, more than an instagramable location, but a place to ponder the movement of history and our part in it. 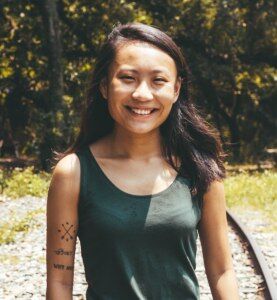 Welcome! I’m Stephanie. I am a 24-year-old from Hong Kong, currently based in Rio de Janeiro, Brazil. I have been travelling since I was 16 around Asia and have been living abroad since I was 18.

My big adventure started when I was studying at a university in Taipei, Taiwan. After 2 years I dropped out and bought a one way ticket to Argentina – a country I have never been to. This big move was one of my best decision!!

Now, I work as a social media manager and digital marketer. I own a couple e-commerce business.